We got opinions.
Podcast, articles, and videos.

SupNerd Chief
SupNerd.tv has been a longtime brainchild, to bring together shamelessly nerdy friends in a safe space to geek out to our heart’s content.

Victoria a published writer, TV presenter, and content producer. Known for her presence in the culinary and sports scene over the past decade, her inherent lifelong passion for gaming and tech has also been a discerning commodity during this global boom of the industry. In the past year, she has hosted and guest-appeared on Asia-Pacific PlayStation 5 Launch event, COMEX IT Show 2020, SingTel’s SuperGamerFest 2020, Lenovo Legion Event “Absolute Gaming Performance”, and is also a TED Talk Speaker on the evolution of self-confidence.

SupNerd Games Editor Carlo is a writer by trade with a passion for wearing caps in any setting. He’s a relentless shit-talker, even when he knows he has no chance of winning. He used to write for MSN Singapore and a few other publications.
What are your favourite games?
I enjoy single player RPGs like The Witcher 3, MMOs like Final Fantasy XIV, and sports games like NBA 2K and FIFA. Lately, I’ve started to appreciate indie games like Hades, Valheim, and Rimworld.
Dream Game:
I would love to play a Warhammer 40K MMO.
Currently playing:
Valheim, Call of Duty: Modern Warfare, Hades, Sea of Thieves
Platforms: PC / PS4 / Nintendo Switch
Gear: A mix of Armageddon, SteelSeries and Vaxee.
Instagram: @nameaintcarlos
Gamer handle: jitterbug726 / Jittah
​Location: Singapore

SupNerd Gadget Guy and Artist
“Probably owns that gadget” “Shockingly average gamer” “Vic’s boyfriend” These are just some of the many phrases used to describe Kym. A self-professed gaming addict, he has a healthy interest in all genres of gaming and the platforms that surround them but a particular affinity to action RPGs / looters.
He owns lots of gadgets and if it has a screen, Kym will find a way to put a game on it (he has that pacman touchbar “game” on his mac; it’s that bad). Gravitates towards console because he doesn’t have a gaming rig… yet.
Steam backlog: ~100
PS4 backlog: ~30
Gaming devices: Quest, Nintendo Switch, PS4, new3dsxl, Samsung Note9
What are you currently playing? Pokemon Shield, Borderlands 3, The Outer Worlds.
What’s your favourite game of all time? For story – Uncharted 2/4, The Last of Us. For gameplay – Ratchet & Clank
What’s your “white whale”? Chrono Trigger! Still haven’t finished it, played it on SNES, then on like 4 different phones. Kept restarting and never properly committed to finishing it.
instagram: @kymochi
Hometown: Melbourne
Current Loc: Kuala Lumpur & Singapore

SupNerd Photographer, Movie and Comics Geek
He’s a lanky, peculiar dude from a third-world country who has an imposter syndrome as a geek. Fortunate enough to have grown up with pop culture (films, graphic novels, video games, music) but still discovering classics and retro cult hits even as he inches ever so closer to a midlife crisis.

He’s the creepy guy with the camera and takes most of the photos and videos for the team. He also makes part of his living by doing voice work, with his ultimate dream being voicing a video game or cartoon character. For the time being though, you can hear him voicing some ads and corporate videos that you can’t wait to skip on YouTube.
Past life: Editor of a local gaming and geek culture magazine which has now withered away and died.
Gaming platform: Still on his PS4… for now, and still refuses to join the PC Master Race.
Genres: Action/adventure, sports, puzzlers, RPGs, NO GRINDY FPS OR MULTIPLAYER.
Backlog: We do not speak of the backlog.
Shoots with: Fujifilm cameras.
Loves: Americana rock.
Hates: Fish.
Race: Myanmarian
Socials: @tunaunga

SupNerd Dog, Witness to All Nerdery, Alita Battlecorgi
Adopted in June 2020 from local Singapore shelter, Voices For Animals. Alita was rescued from a breeding facility and now rules as SupNerd Kween. She is kind to her subjects and loyal to anyone with a treat. Her nickname “Ellie” was inspired by 2 games that Victoria & Kym spent a lot of time on in 2020: The Last of Us 2 and Borderlands 3. 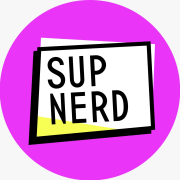